When we are evaluating a diamond the colour, clarity and carat are determined for us by the nature, the only part that can be influenced by human beings is the cut itself.

The cut of diamonds is one of the most important characteristics of the diamond as a well-cut diamond or a badly cut one in the same category can make a huge difference in price. A stone of higher quality and worse cut is usually less desirable than a stone with better cut and lower quality. A diamond can also be polished in different shapes, this is usually done when the rough diamond has an irregular shape and the loss of weight for polishing a round diamonds is not economically feasible. 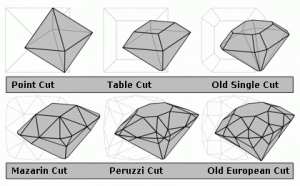 Diamonds were first found in the Golconda region in India about 4500 years ago. These stones were praised for their hardness and luster. They were used only in their rough form for about 4000 years. In the 14th century diamond polishing was invented. The first improvements man made to diamonds was to polish the rough to a perfect octahedral shape. The second step was to cut a table on the octahedral, this was called the table cut and was done during the 15th century, during that time the polishers started to understand the importance of a culet and the table cut evolved to the old single cut. In these cuts the diamond would not shine as the modern cuts do and as such they were not as popular as other gemstones. In the 17th century the first brilliant cut, the Peruzzi cut was invented, Peruzzi cut diamonds still didn’t have a ‘life’ as vivid as modern cuts, but they did have much more brilliance than the old single cut. In the 18th century the old mine cut was developed and later came the old European cut, the real predecessor of the modern brilliant cut. In 1919 Marcel Tolkowsky calculated the perfect proportions for the maximum brilliance and developed the Tolkowsky cut. Since then by using computer models the perfect proportions are being continuously researched and in the last 30 years, we have seen further improvement in polishing of diamonds to increase the brilliance.

The proportions parameter is designed to reflect the optical characteristics of the diamonds. A diamond with ideal proportions will take maximal advantage of the high refractive nature of diamond and therefore show the best brilliance.

If a diamond is too shallow or too thick the light will not be reflected back to the table and the diamond will lose the majority of its sparkle.

The symmetry is the parameter reflecting how uniform a diamond has been polished.

The proportional location of the table to the culet or the Crown towards the pavillion are incorrect. This affects the light reflection within the diamond.

The culet is not in the center of the diamond.

The diamond is not round

The table is not in the center of the diamond.

The width of the girdle isn’t in the same all around the diamond. This can affect the setting process of a diamond in a jewel

When facets don’t align the light reflection within the diamond is affected. This causes a big loss of sparkle

These and more parameters are being checked and graded. Symmetry as well as Proportions is a cumulative grade, which means if for example the culet is not centered and receives a Fair grade, but all the other parameters are excellent the symmetry will still receive a Fair result.

The cut grade for fancy shapes is slightly different than that one for round diamonds as fancy shapes are being polished to maximize the yield out of certain rough stones. Because of this variable there is a significant variation possible in the shape of each of the fancy shapes. You can have a very long pear shape as well as a shorter fatter one.
The symmetry and cut are being evaluated just as round diamonds, but the parameters are much more flexible.

Hearts and arrows are a visual effect in round diamonds. This effect is only visible in a very small number of extremely well-polished diamonds. These diamonds exhibit an enormous amount of sparkle and fire. When using a special Hears and Arrows viewer to view the effect it is necessary to turn the diamond face up to identify eight arrows and when turned face down eight hearts will appear between the arrows. This cut originates from Japan in the 1980’s where it was an enormous hit. Hearts and arrows diamonds are sold at a premium compared to excellent cut diamonds.

Let's get in touch

Give us a call or drop by anytime, we endeavour to answer all enquiries within 24 hours on business days.

You can find out more about which cookies we are using or switch them off in settings.

This website uses cookies so that we can provide you with the best user experience possible. Cookie information is stored in your browser and performs functions such as recognising you when you return to our website and helping our team to understand which sections of the website you find most interesting and useful.

Strictly Necessary Cookie should be enabled at all times so that we can save your preferences for cookie settings.

If you disable this cookie, we will not be able to save your preferences. This means that every time you visit this website you will need to enable or disable cookies again.